Ford debuted the most powerful vehicle it has ever made: The 2020 Ford Shelby GT500.

The high-performance Mustang variant comes with a supercharged 5.2-liter V8 and more than 700 horsepower. It can get to 60mph in just over three seconds and claims the best track times of any Mustang Ford has ever built.

It also has the largest brakes of any domestic sport coupe Ford has made and in a first-ever for the segment, a seven-speed dual-clutch transmission that allows for gear shifts that happen in the blink of an eye.

Last year automotive sales dropped more than 1 percent, if you remove the gains from sales to corporate fleets, with cars taking by far the hardest hit, according to Cox Automotive data. Multiple automakers, Ford included, have announced layoffs, factory closures, and shift reductions in order to cut costs as sales continue to drop.

“Less retails suggests market demand waning,” said Charles Chesbrough, the executive director of strategy and research and senior economist at Cox Automotive, during a presentation Sunday at the North American International Auto Show. “Many of the smaller passenger car segments are dwindling. The headwinds suggest 2019 will not be as strong.” 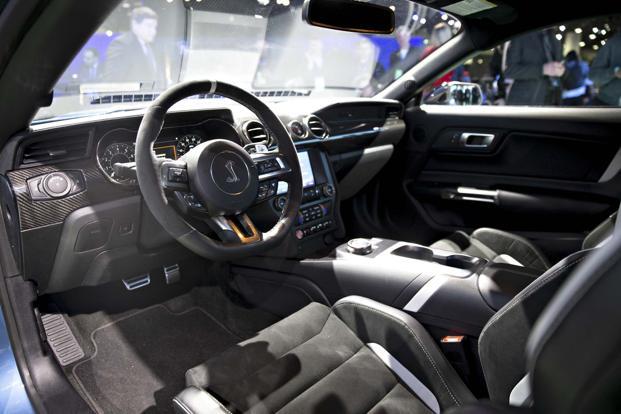 But although Ford won’t report its 2018 sales data until later this month, it is already showing signs that a controversial decision to stop building sedans in order to focus on SUVS and the sporty two-door Mustang line is paying off. The Dearborn, Mich.,-based automaker had better-than-expected earnings for Q3 2018 with a pre-tax profit of $2 billion.

“Going forward, cars will be utilized as high-performance halo platforms,” Brauer said today in Detroit. “Cars now serve a performance role for a brand and not much more: The GT500 will be a more affordable option than the $400,000 Ford GT and feed the dedicated performance consumer out there, who will never go away. Every car company should have one of those in my option.”

As for the new Shelby, it certainly comes with the trappings of a performance vehicle. The exterior is defined by a curved clamshell-like hood, neatly cupped roofline, and a massive louvered hood vent with an removable aluminum rain tray. (The painted stripes down the front of the hood cost extra.) It looks more extreme—angrier—than those conventional rental Mustangs you see in Hawaii and Big Sur.

Buyers can opt to buy a “Handling Package” that includes a rear spoiler with a so-called “Gurney flap” small tab edge projecting from the wing, or a “Carbon Fiber Track Package” that comes with 20-inch carbon fiber wheels with 0.5-inch-wider rear wheels, an adjustable exposed carbon fiber track wing, and rear-seat delete (to make the car lighter, of course). The new transmission is designed to excel under varying drive modes including normal, weather, sport, drag and track; there’s even a launch control. New colors for 2020 include Red Hot, Twister Orange, and Iconic Silver. 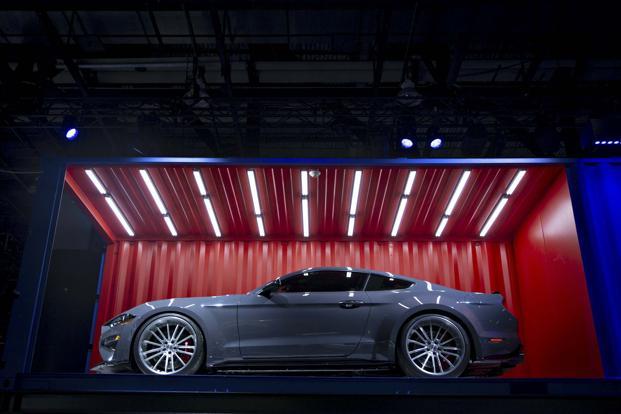 Pricing for the Ford Shelby GT500 has not yet be announced. Photo: Bloomberg

Inside, the exposed carbon-fiber instrument panel (only an appliqué, unfortunately) and suede door panel inserts echo the track-focused mentality of the new car. It comes standard with a new 12-inch, full-color LCD instrument cluster and 8-inch touch screen, but a 12-speaker premium audio system require an additional payment.

This story has been published from LIVEMINT without modifications to the text. Only the headline has been changed.