“We have a neutral outlook on the performance of the real estate sector in Nakuru. However, the market has pockets of value in Mixed Use Developments, which have attractive returns with average rental yields of 8.9%, 2.8% points higher than the market average of 6.1%,” said Johnson Denge, Cytonn’s Senior Manager, Regional Markets when speaking about the overall opportunity in real estate in Nakuru Town. ”The performance of the real estate sector in the Nakuru Town is mainly bolstered by (i) Positive Economic Growth – According to the World Bank Survey 2015, Nakuru County GDP per Capita stands at USD 1,413, which is 4th highest in Kenya after Kiambu, Nyeri and Kajiado, (ii) Devolution – that has opened up Nakuru Town, attracting government institutions, private investors, and entrepreneurs to the county, (iii) Positive Demographics – as population has been growing at on average 3.1% per annum, compared to a Kenyan average of 2.6% p.a, and (iv) Infrastructural Development – In recent years such as the expansion of the Nakuru Nairobi Highway, and upgrading of roads linking several suburbs in the Town, ” noted John Keya, Research Assistant, Cytonn Investments.
Speaking on the performance of various real estate themes, Nancy Murule, Senior Research Analyst at Cytonn Investments, noted that “for the residential sector, the opportunity is in 3-bed apartments in both the high end and mid end segment in areas such as Milimani, Section 58 and Naka. The units record average rental yields of 5.0% and 5.5%, respectively, higher than the market average of 4.2% as well as high-annualized uptakes of 22.9% and 39.7%, respectively. For the commercial sector, the opportunity lies in Mixed Use Developments which have high occupancy rates of on average 81.6%, 16.6% higher than conventional office space at 65.0%, thus high yields of on average, 8.9% as compared to office at 5.4%. For land and site and service schemes, the opportunity is in areas such as Kiamunyi and Milimani that have a capital appreciation of on average 11.6% and 10.7%, respectively, as compared to a market average of 8.8%.”

Out of the five real estate themes under evaluation in Nakuru Town, two themes, that is MUDs and land have a positive outlook, two themes that is retail and the commercial office sectors have a negative outlook while one theme, that is residential has a neutral outlook, thus our outlook for the Nakuru Town real estate market is neutral. The market, however, has pockets of value in various sectors as shown below; 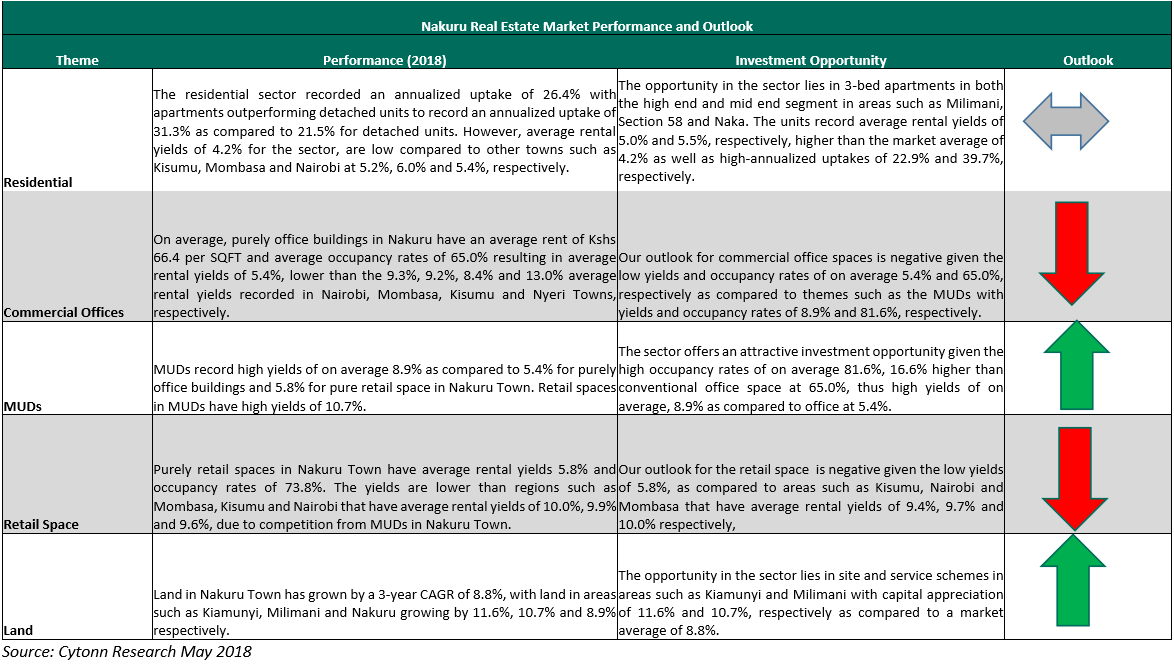 COMMERCIAL OFFICE SECTOR PERFORMANCE – The commercial office buildings and MUDs (comprising of a blend of both commercial office and retail) are mainly located in the Nakuru CBD. Generally, Nakuru Town lacks Grade A office spaces with most of the buildings being Grade C. In terms of performance, purely office spaces in Nakuru Town record average rental yields of 5.4%, 3.5% points lower than the 8.9% for MUDs. MUDs outperform purely office buildings in the town due to higher footfall as they combine both office and retail uses. This results in higher occupancy rates, and consequently higher rents. On average, MUD’s have an occupancy rate of 81.6%, 16.6% higher than purely office buildings that have an average occupancy rate of 65.0%. The rents charged by MUDs are 29.5% higher at Kshs 86 per SQFT compared to Kshs 66 per SQFT charged for purely office buildings.
RETAIL SECTOR PERFORMANCE – Nakuru County has 4 malls of which 50% are community malls (Gross Floor Area (GFA) of 125,001 – 400,000 SQFT) and 50% are neighbourhood malls (Gross Floor Area (GFA) of 20,000 – 125,000 SQFT). On average, the retail space in Nakuru has rental yields of 5.8% as compared to Nairobi, Mombasa and Kisumu that have average rental yields of 9.7%, 10.0% and 9.9%, respectively. The relatively low yields are as a result of low rental rates of Kshs 91.7 per SQFT, 39.3% lower than areas such as Kisumu that have rental rates of Kshs 151.0, as the most of the malls have just been opened, and are facing stiff competition from pre-existing Mixed Use Developments.

LAND PERFORMANCE – We focused on areas such as Kiamunyi, Milimani, Nakuru CBD, Ngata and Naka. Over the last 3-years the areas have recorded growth in asking land prices of 11.6%, 10.7%, 8.9%, 7.4%, 7.1% and 6.8% per annum, respectively, thus Nakuru Town land sector recorded an annualized capital appreciation of 8.8% this is attributed to speculation and increased demand for land in residential zones.