Cytonn Real Estate, the development affiliate of Cytonn Investments, last week released its Nairobi Metropolitan Area Infrastructure Report 2018, which looked into the state of infrastructure including transport systems such as roads, rail and airports and connectivity to water, sewerage services and electricity in the Nairobi Metropolitan Area (Nairobi, Kiambu, Kajiado, Murang’a and Machakos Counties) and the potential impact of infrastructure development on real estate investment.

The report highlighted that infrastructural development plays a key role in the development of the economy as a whole through enhancing connectivity and the creation of a better operating environment and thus drives sectoral growth, including that of real estate. The main impact of infrastructural developments on real estate, according to the report, include; i) increased demand for property, which then causes an increase in property values, ii) opening up of previously inaccessible areas and improved connectivity thus making areas more attractive for investment, and iii) reduced development costs for developers, given the savings in construction costs. “The completion of the Thika Super-highway in 2012, for instance, led to an influx of residential and commercial developments in areas such as Kasarani, Thika, Ruiru and Juja, as real estate investors sought to tap into the growing middle class population in the area. From our analysis, through the development of malls such as the Garden City, the Thika Road Mall and Juja City Mall, the mall supply along the Thika Superhighway has grown at a CAGR of 27.7% from 0.3-mn sqft in 2013 to 1.3 mn sqft as at 2018,” Patricia Wachira, a Research Associate at Cytonn Real Estate, noted. According to the report, infrastructural development leads to an increase in property prices, for example, with the completion of the Northern Bypass, land prices in Ruaka appreciated by 15.7% from an average of Kshs 40.0 mn per acre in 2011 to Kshs 83.0 mn per acre in 2016, on account of increased demand for property in the area. In general, infrastructural developments such as Thika Superhighway, the Eastern Bypass and Northern Bypass, have led to increased property prices with a 5-Year CAGR of 15.8%, signaling increased demand for the properties as a result of infrastructural development.

In terms of infrastructure supply, Johnson Denge, Senior Manager Regional Markets, Cytonn Real Estate, noted that, ‘’Nairobi County offers the best investment opportunity due to presence of relatively good coverage of all infrastructure sub-sectors that is water, electricity and sewerage connection, roads among other means of transport, in comparison to other counties in the metropolis. The investment opportunity in the county, is in areas along Ngong Road, which is currently being upgraded, such as Kilimani, Race Course, and, Karen. In Kiambu, the investment opportunity is in areas like Thika, Ruiru, and Kikuyu, which carry majority of the county’s infrastructural projects. For Machakos, areas to invest in are Athi River, Syokimau and Mlolongo, and areas in close proximity to the upcoming Konza due to the incoming infrastructure aimed at supporting the ICT Park.”

According to the report, there has been increased investment in infrastructure in the Nairobi Metropolitan Area, by both private and public sector players, and the main factors driving the same include; i) a relatively high population growth rate of 3.1% against the national and global average growth rate of 2.5% and 1.2%, respectively, as at 2018, which continues to outstrip infrastructure and service capacity thus creating demand for the same as required to serve the growing population, ii) government initiatives such as ; a) establishment of the road annuity fund, for the purposes of providing capital to meet the National Government’s annuity payment obligations for the development and maintenance of roads under the Roads Annuity Programme (RAP), b) establishment of a 15- year infrastructure bond of USD 300 mn in 2016, by the Government of Kenya to fund infrastructure projects, c) increasedbudgetary allocation to improve infrastructure in the country, evidenced by a 6- year CAGR of 7.7% from Kshs 268 bn in 2012/13 to Kshs 418.8 bn in 2018/19, iii) the rising foreign direct investment whose inflow increase by 71.8% from Kshs 39.0 bn in 2016 to Kshs 67.0 bn in 2017, iv) increasing private sector investment, driven by incentives; the 25.0% tax exemption, which allows investors in commercial property who spend on social infrastructure to recover their expenses within 4-years, according to the Finance Bill 2012, and the introduction of Power Purchase Agreements to boost investment in energy.

SECTION 2: SUMMARY OF THE INFRASTRUCTURAL DEVELOPMENTS IN THE VARIOUS SUB-SECTORS

Roads: Roads are the common mode of transport in Kenya accounting for 62.9% of the total value of output from the transport sector as at 2018, according to the Kenya National Bureau of Statistics (KNBS). In 2011, it was estimated that, with the exception of Nairobi, 9.6% of roads in the Nairobi Metropolitan Region were paved compared to a national average of 13.7%. The percentage of paved roads has increased since then given the continued investment in roads, with at least Kshs 48.3 bn invested in roads between 2012 and 2018. During this period, Nairobi County had the largest share of funds allocated to road projects at 61%, attributable to the completion of roads such as the Southern Bypass, Eastern Bypass and Northern Bypass. In terms of road length, Kiambu County has the highest percentage at 39% attributable to construction roads in the county such as: the 80 km road from Muigai Inn through Kiandutu and Kiganjo to Muthaiga, and the 40 km road from Gatundu to Karinga. Currently, Murang’a County has the largest road kilometers under construction at 29.0% of the total road projects in the Metropolis. In terms of value, Nairobi has the highest value of investments in roads at 53.2% of the total amounts investments, as most of the roads under construction are class A roads.

Railway: Railway transport accounts for only 0.5% of the value of output from transport in Kenya, with the total railway network in the Nairobi Metropolitan area being 206km, and consisting of 15 railway stations within the Nairobi County, and 5 railway stations within Kiambu County. However, plans are underway to improve public rail transport, with some of the projects in the pipeline being; Upgrading of Nairobi Railway Station and the Rail flyover project, which is part of Nairobi Integrated Urban Development Master Plan 2030, which will connect Enterprise Road to the Nairobi Central Business District, and the extension of the Standard Gauge Railway, with Phase 2A set to run from Nairobi to Naivasha.

Water: The average rate of access to piped water in the Nairobi Metropolitan Area stood at 59% with Nairobi having the highest coverage at 81%, according to research by the Water Services Regulatory Board (WASREB) 2018. However, access to piped water in Nairobi’s satellite towns mainly in Kajiado and Machakos Counties, still remains low at 42% and 48%, respectively. The low-piped water supply has created opportunities for the private sector to invest in other water sources such as water vendors and drilling boreholes to supplement the inadequate and inconsistent water supply to several satellite towns.

Sewerage: Sewerage connections remains low causing majority of residents to rely on septic tanks and other forms of improved sanitation such as pit latrines and bio-digesters. Nairobi County has the highest coverage of 50%, while Machakos, Kiambu, Murang’a and Kajiado have minimal coverage of 17%, 15%, 3% and 0%, respectively according to Water Services Regulatory Board. The inadequate sewerage coverage has triggered several projects, aimed at meeting the demand, with Kiambu County having the largest share of proposed sewer projects at 65.5%, attributable to the low sewer connectivity in the area coupled with the high population growth in its fast-growing towns such as Ruaka, Ruiru and Kikuyu, thus necessitating an improvement in sewer connectivity.

Electricity: Nairobi County had the highest access to electricity with 72.1% of the population relying on the utility for lighting in comparison to other counties such as Murang’a, which had the least electricity penetration of 13.8%, according to a KNBS and SID International’s National Inequality Survey carried out in 2013. However, electricity penetration has significantly improved over the past five years, evidenced by the increase in the number of customers to 6.5 mn as at March 2018 from 2.3 mn customers in March 2013, according to Kenya Power. This represents an electricity access rate of 72.6%, which is a 50.3% points’ growth from the 22.3% recorded in 2013. The government continues to embark on various programs aimed at promoting access to electricity, which include; i) the establishment of a least cost power development plan, aimed at guiding energy sector stakeholders, ii) last mile project, whose aim is to increase electricity access to Kenyans, iii) Kenya Electricity Expansion Project (KEEP), which aims to enhance the electricity network, iv) Global Partnership for Output Based Aid project, and v) Nairobi City Centre Network Upgrade and Reinforcement Project which aims at improving the quality of power supplied in the city and its environs.

Airports: The area is mainly served by two major airports, the Jomo Kenyatta International Airport (JKIA), located along Mombasa Road and the Wilson Airport, located along Lang’ata Road. In addition, the region also boasts of other airstrips, which mainly serve specific entities such as national parks and the Kenya Air Force. Airports significantly contribute to the Kenya’s economy, through the tourism and hotel industry, as it is the most popular means of transport for international guests. In 2017, 59.6% of international arrivals to Kenya passed through the Jomo Kenyatta International Airport, and this trend is set to continue, given the ongoing infrastructural developments at the airport meant to enhance its capacity and efficiency. 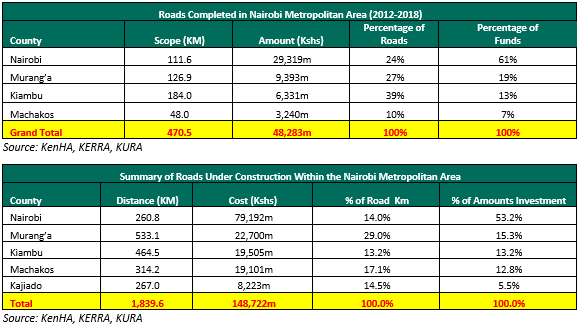 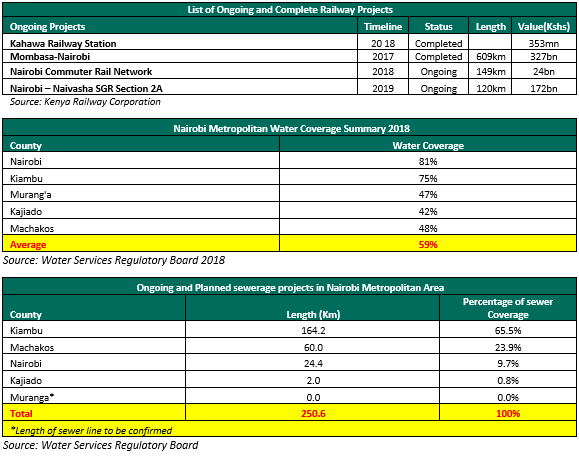 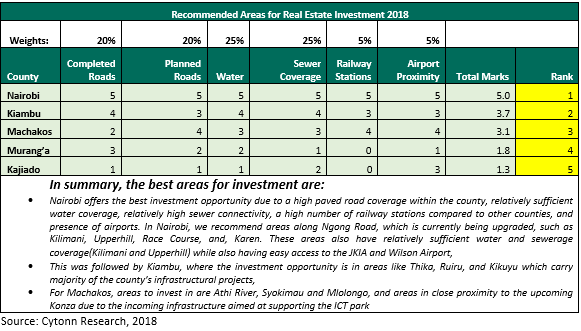 Cytonn Investments Management Plc is an independent investment management firm, with offices in Nairobi – Kenya and D.C. Metro – U.S. We are primarily focused on offering alternative investment solutions to individual high net-worth investors, global and institutional investors and Kenyans in the diaspora interested in the high-growth East-African region. We currently have over Kshs 82.0 billion of investments and projects under mandate, mainly in real estate.