SECTION I: OVERALL SECTOR PERFORMANCE
The real estate sector in 2018, recorded continued investment across all themes driven by i) the political stability following the conclusion of the electioneering period in Q1’2018, ii) the continued positioning of Nairobi as a regional hub that has led to increased entry of multinationals creating demand for residential units, retail space, commercial offices and hotels, iii) the kicking off of the affordable housing initiative which has gained momentum with the launching of projects such as the Pangani Estate in Nairobi, and iv) the improving macroeconomic environment, with the country’s GDP growing by 6.0% in Q3’2018, higher than the 4.7% recorded in Q3’2017.
In terms of performance, according to Cytonn’s 2018 Real Estate Review, the sector recorded rental yields of 9.0% in retail, 8.1% in commercial office, 8.0% in mixed-use developments (MUDs), 7.4% in serviced apartments and 4.7% in residential sector, resulting to an average rental yield for the real estate market of 7.4%, compared to 7.6% in 2017. Capital appreciation in Nairobi and its metropolis averaged at 3.8% in 2018 from 6.5% in 2017 and thus the real estate sector recorded a total return of 11.2% in 2018 compared to returns of 14.1% in 2017, showing a slow-down in real estate operators’ performance.
According to Johnson Denge, Senior Manager Regional Markets at Cytonn, “The slump in the 2018 real estate returns is attributable to a slowdown in demand for property amid the growing supply, evidenced by the 3.0% points decline in the residential sector occupancy rates and the 0.4% points decline in occupancy rates in the retail space on account of increased supply of mall space recording a growth of 4.8% y/y in Nairobi to 6.5mn SQFT in 2018 from 6.2mn SQFT in 2017. However, it is important to note that development returns for investment grade real estate is still estimated to be approximately 23.0% to 25.0% p.a. in the mid and long term’’
According to the Cytonn’s Report, real estate is expected to record increased activities in 2019 supported by i) the government’s focus on the affordable housing initiative which has gained momentum with the launching of projects, ii) the continued positioning of Nairobi as a regional hub which has led to the continued entry of multinationals creating demand for residential units, retail centres, commercial offices and hotels, iii) political stability and iv) the improving infrastructure such as the development of sewer system in Ruiru and road network, for instance the ongoing construction of Ngong Road (Phase 2) and the Superhighway linking Jomo Kenyatta International Airport to Rironi area in Limuru along the Nakuru- Nairobi highway. However, investors, have to conduct research to identify market niches and investment opportunities in the market given the overgrowing supply in some of the themes such as the retail sector, the office sector and selected markets in the residential sector, which is likely to affect occupancy rates, and thus returns.

Among the key challenges facing the sector during the year were; i) uncertainty surrounding statutory approvals particularly in light of the ongoing demolitions of allegedly legally approved buildings, ii) lack of financing as loans remain out of reach for a majority of aspiring homebuyers, iii) an oversupply in some of the themes such as the retail sector which recorded an oversupply of 2.0 mn SQFT of space and iii) a tough operating environment characterized by low private sector credit growth, which averaged at 4.4% as at October 2018, compared to a 5-year average of 14.0% (2013-2018).

RESIDENTIAL SECTOR PEFORMANCE: The residential sector recorded a decline in performance with average rental yields dropping marginally by 0.5% points, attributable to a decline in occupancy rates which reduced by 3.0% points on average, from 84.0% in 2017, to 81.0% in 2018, attributable to increased stock in the market against minimal uptake. ‘’During the year, apartments performed better than detached units, with average annual uptake of 26.6% compared to detached units’ 20.5%, and average returns of 11.4%, compared to detached units returns of 8.9%, ‘’ stated Wacu Mbugua, an assistant research analyst at Cytonn. “We attribute the growth in demand for apartments to their affordability especially as loans remain out of reach for a majority of aspiring homebuyers,’’ Wacu added.

“Notably, the year witnessed more efforts towards delivering affordable housing, with policies and financing initiatives geared towards making it a reality. Out of the seven Nairobi Urban Regeneration Projects, Pangani Estate, a project that is expected to delivered 1,000 units to the market, was launched towards the end of the year and we expect more projects to follow suit before the end of 2019,’’ noted Patricia Wachira, a research associate at Cytonn.

According to the report, the investment opportunity in the residential sector is in select areas that offer high and stable returns such as Runda Mumwe for detached units, Kilimani for upper mid-end apartments, and Donholm/Komarock, Thindigua for lower mid-end apartments. These areas recorded returns of 14.8%, 11.5%, 14.4% and 13.8% respectively.

COMMERCIAL OFFICE SECTOR PERFORMANCE: The commercial office sector performance in Nairobi improved, albeit marginally, with the asking rents increasing by 1.3% from Kshs 101.0 per SQFT in 2017 to Kshs 102.3 per SQFT in 2018. The occupancy rates increased by 0.7% points from 82.6% in 2017 to 83.3% in 2018, resulting in a 0.2%-point increase in rental yields from 7.9% in 2017 to 8.1% in 2018. “The slight improvement is attributed to the political stability that has led to increased economic activities and the continued positioning of Nairobi as a regional hub that has led to increased entry of multinationals, “said Juster Kendi, a research analyst at Cytonn.
“We remain cautiously optimistic on the performance of commercial office space in Nairobi, despite the marginal increase in returns, and occupancy, as the sector has an oversupply of 4.7mn SQFT, and thus investors are likely to face challenges on exit, when selling and renting. However, we recommend investments in differentiated concepts such as serviced offices which have low supply with a market share of just 0.35% and high returns with average rental yields of 13.4% compared to a market average of 8.1%, ‘’ she added.
RETAIL SECTOR PERFORMANCE: The retail sector performance softened in 2018, with occupancy rates decreasing by 0.4% points from 80.3% in 2017 to 79.8% in 2018, while the rents decreased by 3.8% from Kshs 185.3 per SQFT in 2017 to Kshs 178.2 per SQFT in 2018, resulting in a 0.6%-point decrease in rental yields from 9.6% in 2017 to 9.0% in 2018. According to Juster Kendi, a research analyst at Cytonn, “The decline in performance is attributed to increased supply of mall space, which grew by 4.8% y/y in Nairobi to 6.5mn SQFT in 2018 from 6.2mn SQFT in 2017 through the opening of malls such as the Waterfront in Karen and Signature Mall in Mlolongo, resulting in an oversupply of 2.0mn SQFT.’’
“Despite the current oversupply, our outlook for the sector is positive as the sector continues to attract both local and international retailers driven by; i) a conducive macro-economic environment, with an average GDP growth of above 5.0% over the last 5-years and ii) a low retail penetration rate of 35.0% that serves as an incentive for formal retailers,” noted Juster.
HOSPITALITY SECTOR PERFORMANCE: The hospitality sector has continues to depict signs of recovery following the slump between 2011 and 2015 that was caused by insecurity and terrorist attacks. In 2018, serviced apartments recorded improved performance in 2018 with the average rental yield coming in at 7.4%, which is 2.1% points higher than 5.3% recorded in 2017, attributed to the increased demand, which triggered an increase in charge rates, as well as increased occupancy rates with an average of 80.0% in 2018, compared to 72.0% in 2017. “We attribute the improved performance of the hospitality sector to the stable political environment and improved security, making Nairobi an ideal destination for both business and holiday travelers,” said Beatrice Mwangi, an assistant research analyst at Cytonn.
“In the hospitality sector, the investment opportunity lies in Kilimani and Westlands, which are the best performing areas with average rental yields of above 10.0%. This is attributed to the good transport network in these areas making them easily accessible, proximity to business nodes such as Upperhill, good security given that the areas are mapped as UN blue zone areas, and availability of key amenities such as Yaya Centre, The Westgate Mall and Jomo Kenyatta International Airport (JKIA),’’ Beatrice added.
LAND SECTOR PERFORMANCE: The Nairobi Metropolitan Area land prices recorded a 7- year CAGR of 13.7%, and a 3.8% y/y price increase in 2018, driven mainly by, i) provision of trunk infrastructure such as road network and ii) the growing demand for development land especially in the satellite towns such as Ruiru and Syokimau as developers strive to drive the government’s Big Four government agenda on the provision of affordable housing.
According to the report, the investment opportunity lies in Satellite Towns such as Ruaka, Utawala, Ruiru and Thika, evidenced by high capital appreciation of 16.2%, 17.5%, 4.7%, 7.7% y/y capital appreciation, respectively, in addition to other areas such as Kilimani, Karen and Kitisuru, which had rates of 10.7%, 10.3% and 10.5% y/y capital appreciation, respectively,
INFRASTRUCTURE SECTOR – In 2018, the infrastructure sector recorded increased government investment. According to KNBS Economic Survey 2018, the total expenditure on roads has increased by 54.9% over a 4-year period to Kshs 198.4 bn in 2017/18, from Kshs 89.5 bn in 2013/14. The government continues to increase its investments in order to boost the country’s economic growth through: (i) revenue generation, (ii) increased employment opportunities, (iii) betterment of services and facilities, and (iv) improving the ease of doing business in Kenya.
According to the report, Nairobi and Kiambu counties had the best infrastructure evidenced by the presence of relatively good coverage of all infrastructure sub-sectors, in comparison to other counties. Some of the key infrastructural projects that were commissioned in 2018 include the four link roads that is set to connect the Garissa Highway to the upcoming Thika Bypass and the construction of phase 2A of the Standard Gauge Railway (SGR) traversing through the Nairobi National Park, and
LISTED REAL ESTATE SECTOR PERFORMANCE: In the listed real estate sector, Stanlib’s Fahari i-REIT, recorded a declined in value by 5.9% y/y trading at an average of Ksh 10.6 in 2018 compared to Kshs 11.3 in 2017. The REIT closed at a price of Kshs 10.9 per unit, 45.5% lower than its listing price of Kshs 20.0 in November 2015. According to Joseph Wanga, a research analyst at Cytonn, “The prices of the instrument remained low in 2018 due to: i) opacity of the exact returns from the underlying assets, ii) the negative sentiments engulfing the sector given the poor performance of Fahari and Fusion REIT (FRED), iii) inadequate investor knowledge, and iv) lack of institutional support for REITs.’’
“Notably, during the year, Stanlib Fahari I-REIT acquired 67 Gitanga Place office building in Lavington at Kshs 850.0 mn in compliance with the Capital Market’s Authority’s (CMA) requirement for listed REITs to invest a minimum of 75.0% of assets in income-generating real estate. The acquisition of office block thus raised their real estate assets share in the fund to 90.0% from 67.0% invested in Greenspan Mall, Signature International Limited, and Bay Holdings Ltd, with the newly acquired property expected to generate a net income of Kshs. 73.8Mn p.a, translating to a 8.7% rental yield,’’ he added.

SECTION III: THE KEY AREAS OF OPPORTUNITIES BY SUB-SECTOR
Based on returns, factors such as supply, infrastructure, land prices and availability of social amenities the following are the ideal areas for investment; 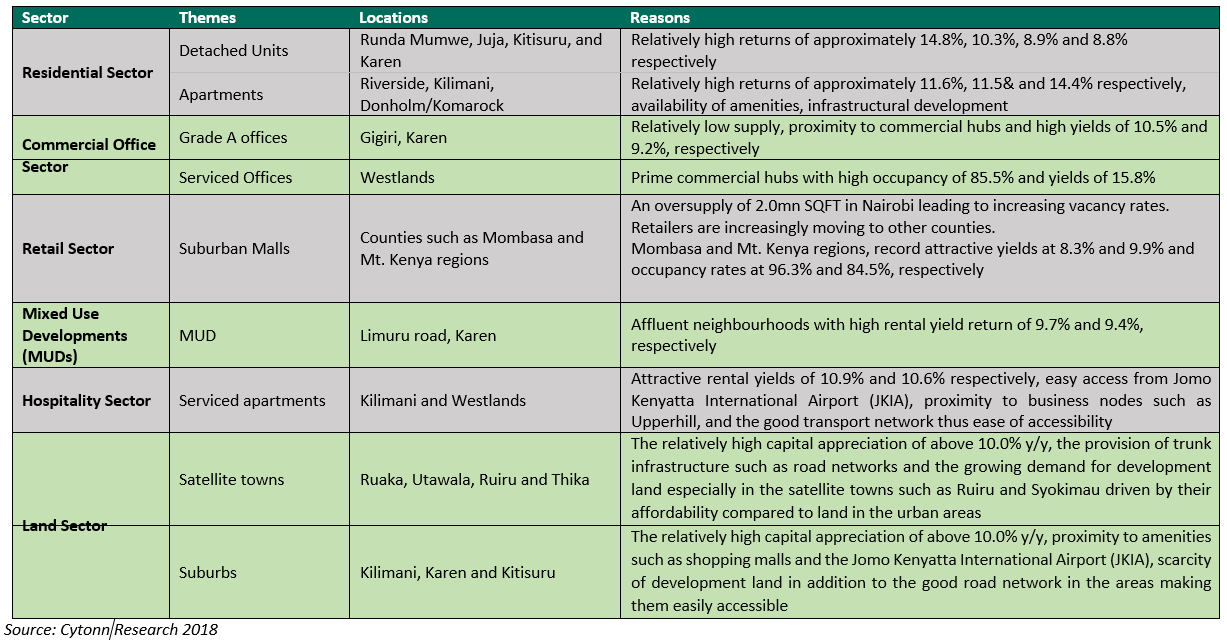 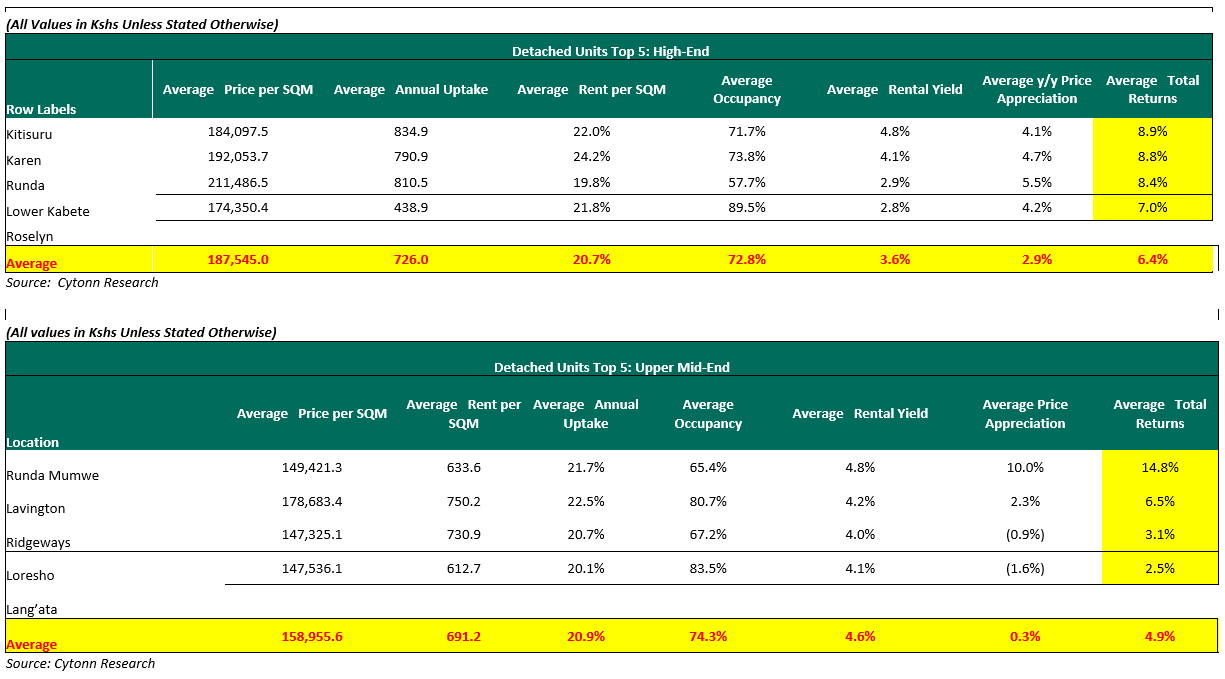 Cytonn Investments is an independent investment management firm, with offices in Nairobi – Kenya and D.C. Metro – U.S. We are primarily focused on offering alternative investment solutions to individual high net-worth investors, global and institutional investors and Kenyans in the diaspora interested in the high-growth East-African region. We currently have over Kshs 82.0 billion of investments and projects under mandate, primarily in real estate.