Cytonn Real Estate, the development affiliate of Cytonn Investments, today released its Kenya Retail Sector Report – 2017. The report themed “Kenya’s Retail Sector: Cautious Optimism in the Face of Turbulence” focused on the current state of the retail market in Kenya in terms of supply, demand, key drivers challenges and review the performance in 2017, which was compared with 2016’s performance to gauge the trends and finally give an outlook.  The report was based on research conducted on 8 retail nodes in Nairobi and the key urban cities of Eldoret, Mombasa, Kisumu and the Mt. Kenya Region, which include Nyeri, Meru and Nanyuki Towns.
According to the report, there has been an increase in the supply of retail space, with Nairobi alone recording a 41.6% increase in supply y/y due to the opening of malls like Two Rivers and Rosslyn Riviera on Limuru road and Next Gen Mall on Mombasa Road. The high supply, led to lower occupancies and lower asking rents which led to a decrease in returns with the average rental yield declining in the whole market to 8.3% in 2017 from 8.7% in 2016, and a 0.4% points decline in the Nairobi area to 9.6% from 10.0%, over the same period.Occupancy rates declined by 2.7% points in the whole market to 0.2% in 2017 from 82.9% in 2016, and 9.0% points in Nairobi to 80.3% from 89.3%, over the same period.
Speaking during the release of the report, Cytonn Real Estate’s Research Analyst, Nancy Murule, noted that “there has been an increase in mall space supply in Nairobi County as well as in the counties as we saw developers focusing on the Nairobi Metropolitan Area and other Counties such as Kiambu and Machakos”. She added that “the outlook for the sector remains cautiously positive supported by the demographics and demand from more international brands looking to set businesses in Kenya”.Cytonn Real Estate Senior Manager, Regional Markets Mr. Johnson Denge, speaking at the release of the report noted that “The sector is likely to experience a shake up with the leading retail outlet in Kenya, Nakumatt, exiting its flagship stores and thus leaving some malls without an anchor tenant. This is likely to be an opportunity for more foreign retailers to come into the country, thus changing the landscape of how the sector has been operating”.  Other than Nairobi, Mombasa ranked as one of the best performing markets in the region due to low supply and a relatively high GDP per Capita.According to the report, 2017 has been a turbulent year for the retail sector in Kenya due to several reasons:

The above challenges have led to a decline in performance of the sector with average rents declining by 9.0% countrywide from an average of Kshs 154.9 per SQFT in 2016 to Kshs 141.0 per SQFT in 2017.

In terms of performance within Nairobi, the report noted that Westlands was the best performing node with a 10.4% rental yield as it serves Nairobi’s middle and high income population segments while Nairobi Eastlands was the worst performing with average rental yields of 6.1% owing to a 45.2% increase in supply following the opening of K-Mall and Southfield Malls, that added a cumulative retail space of 23,000 SQM to the market, which led to a 23.3% points decline in occupancy rates.

On the performance of the key urban cities, the report noted that Nairobi, Kisumu and Mt Kenya region had the highest rental yields of 9.6% and 9.1% and 9.1%, respectively. Eldoret was the worst performing region owing to its low rental rates of Kshs 96.0 PSQFT, 46.9% lower than the market average of Kshs 141.0/SQFT, and its rental yields remained the same as last years at 6.6%.
The report also rated malls performance by their classification, i.e

According to the report, destination malls had the highest yields with a market average of 10.3% compared to 11.7% in 2016. The yield declined despite a 14.4% increase in rental rates to Kshs 234.4 from Kshs 204.0 as recorded in 2016 due lower occupancy at 77.3% compared to 94.0% in 2016. Neighborhood malls on the other hand had the highest occupancy rates at 82.9% compared to 77.3% and 76.9% for destination and community malls, respectively.In terms of opportunity, the report noted that Mombasa had the best opportunity for mall developers based on ranking by rental yield, contribution to current retail space supply in the market, contribution to upcoming retail space supply in the market and GDP Per Capita. Nairobi has the highest supply of the retail space at 59.4% as well as the highest incoming supply which was 49.7% of Kenya’s total retail space deal pipeline.

The Report noted that the key drivers for the retail sector in Kenya were mainly: i) High population growth rates and urbanization rates at 2.6% against a global average of 1.2% and 4.4% against a global average of 2.1%,respectively, ii) increased foreign investment in the country with international developers such as Actis, Azaelia Holdings and Avic CATIC, being behind the country’s largest malls  such as Garden City, The Hub and Two Rivers Malls, respectively, iii) Increased infrastructural development opening up new areas for development, and iv) E- Commerce diversifying retailers product offering and customers experience. The sector however faces several challenges such as increased competition, fragmented markets mainly concentrated in urban areas such as Nairobi, pilferage and inadequate financing.

The report is available online: 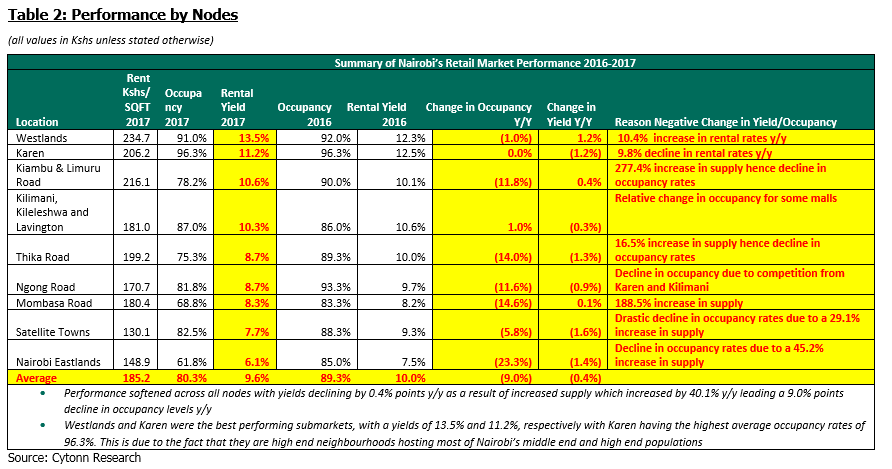 Cytonn Investments is an independent investment management firm, with offices in Nairobi – Kenya and D.C. Metro – U.S. We are primarily focused on offering alternative investment solutions to individual high net-worth investors, global and institutional investors and Kenyans in the diaspora interested in the high-growth East-African region. We currently have over Kshs. 82 billion of investments and projects under mandate, mainly in real estate.